Erik ten Hag’s men took the lead in the first half thanks to Casemiro’s well-taken finish, before Luke Shaw and Marcus Rashford scored two beautiful team goals after the break to make it three against the Cherries.

United extend our five-point lead over fifth-placed Tottenham Hotspur and close the gap on Newcastle, who drew 0-0 with Arsenal at the Emirates Stadium.Before the game, Lisandro Martinez took to the Old Trafford pitch to show off his World Cup winner’s medal to the United fans, who greeted his return with a thunderous applause. In Martinez’s honour, a banner with a butcher’s cleaver on the Argentina flag was displayed, and United fans sang “Argentina” to the defender.

United took control of the game early on, controlling the majority of play in the Bournemouth half for the first ten minutes. Anthony Martial had the best chance of the first half when Bruno Fernandes picked out a beautiful pass to Shaw, whose cross found the French striker but his header went wide.

Ten Hag’s men refused to let go of the ball, and when Christian Eriksen’s incredible free-kick whipped into the box, Casemiro guided the ball past Mark Travers to open the scoring and claim his first Old Trafford goal. Bournemouth’s best attack came after Casemiro conceded a free-kick, with Philip Billing’s strike hitting the post and going out for a corner. When the ball fell to Chris Mepham, who fed Dominic Solanke, the Cherries tried to move quickly, but the ex-Liverpool striker couldn’t get the header on target.

United countered with multiple attacks, the first of which fell to Donny van de Beek after Eriksen’s cross attempted to pick out the Dutchman but was cleared away to Bruno Fernandes. His cross found its way to the in-form Rashford, but before he could react, it was well blocked by Lloyd Kelly and cleared away.

Unfortunately, Van de Beek was injured by a challenge from Marcos Senesi and was replaced by Alejandro Garnacho. United began the second half exactly as we ended the first, with complete possession dominance. The rain continued to fall on the hallowed turf of the Theatre of Dreams, but that didn’t stop the Reds from scoring again, this time through Shaw, who started a well-worked team goal. 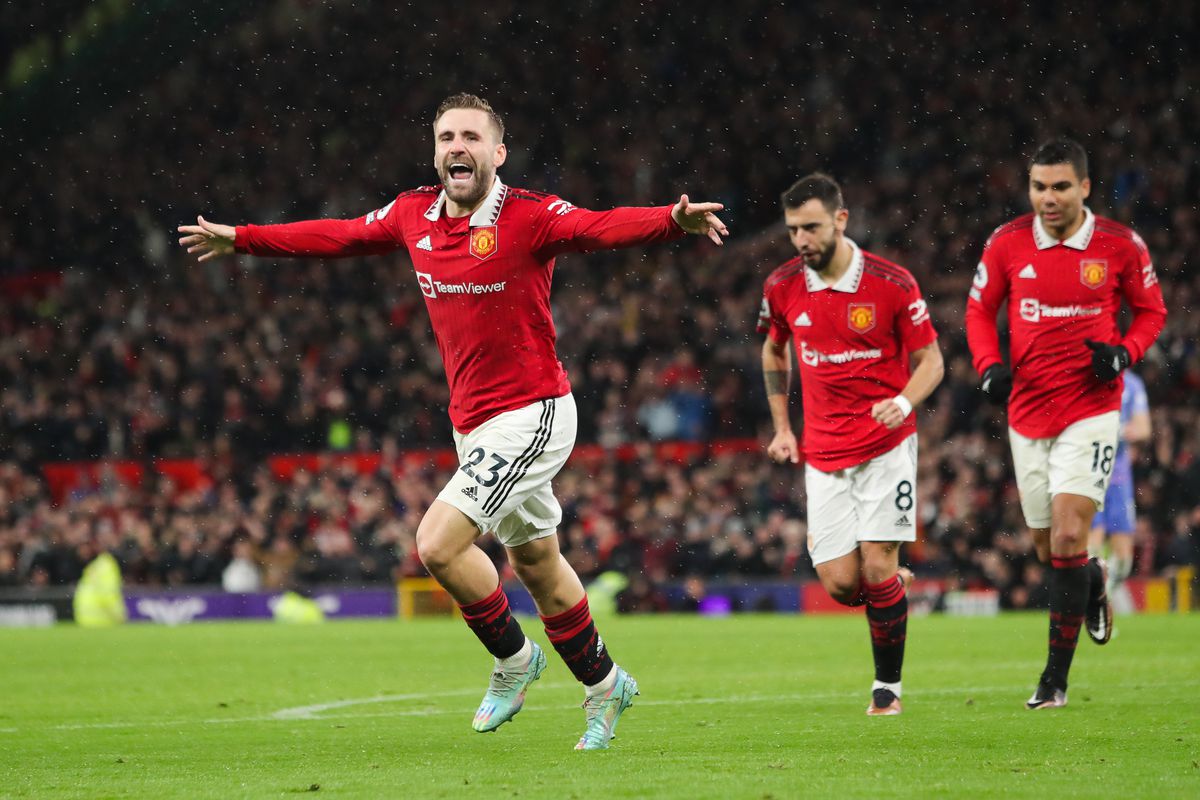 His give-and-go pass to Rashford sparked the attack, and the England international darted towards the Stretford End. He found Fernandes, who saw substitute Garnacho and gave him the opportunity to whip the ball to Shaw, who finished the attack with a right-footed effort to double United’s lead.

That goal fueled the Reds’ attacks, the best of which came from Martial, but under pressure, United’s no.9 couldn’t direct his header into the goal. Bournemouth didn’t give up, and right-back Adam Smith burst through to send in a great cross for Billing, whose header forced a miraculous save from David De Gea. The Cherries were inspired to keep up the pressure when Billing’s pass found winger Jaidon Anthony, who was unable to beat De Gea after the Spaniard made another excellent save.

Ten Hag made three substitutions at the 68-minute mark, replacing Martial, Eriksen, and Aaron Wan-Bissaka with Fred, Diogo Dalot, and Anthony Elanga to provide fresh options in the closing stages. When Fred found the speedy Argentinian, it was the early substitute Garnacho who had a great chance to make it three. He beat Jack Stacey to the ball and tried to curl it past Travers, but the ball ricocheted off the far post and went wide.

Shaw sent a great ball over the top of the Bournemouth defence into the path of Fernandes in the final five minutes of the game. The Portuguese marvel squared the ball across the box to Rashford, who slotted it home for his sixth goal in a row at Old Trafford and fourth since the restart.