In a Regina retirement home, boxing and pool keep pandemic loneliness at bay

Much of the national spotlight has focused on the plight of seniors either facing deadly COVID – outbreaks at long-term care homes or crippling isolation inside their own homes. But some seniors have managed to combat loneliness by staying social and active in retirement homes.

– year-old Jim Nedelcov was living alone in his own apartment when the pandemic started. Faced with indefinite isolation and boredom, he decided to move into a private residence for seniors in Regina that offered residents daily activities and socializing alongside strict COVID – precautions. (Matthew Howard / CBC)

Like many other seniors, retired teacher Jim Nedelcov found himself trapped in his own apartment, bored and lonely when a lockdown was imposed about a year ago to fight the COVID – pandemic

For the – year-old grandfather, the antidote to loneliness was to move into a retirement community, despite the increased risk of infection from living in a communal setting.

Nedelcov moved into an apartment in Harbor Landing Village, a private retirement residence in Regina. It had implemented strict measures to keep residents safe but also promised something that many seniors have had to abandon during the pandemic: recreational activities and the chance to socialize.

“When you wake up in the morning, you’ve got to have something to do, “said Nedelcov.

He says he likes to take exercise classes and shoot pool with other residents.

Much of the national spotlight over the past year has focused on the plight of seniors either facing deadly COVID – 000 outbreaks at long-term care homes or crippling isolation inside their own homes. But some seniors have managed to avoid loneliness and the coronavirus in facilities similar to Harbor Landing Village.

“It’s common to find places where seniors, although locked in a community, still have reasonable freedoms and interaction within that community, still following the rules, of course, “said Bill VanGorder, spokesman for CARP, which lobbies on behalf of seniors.

” It just gets buried under all the bad news about long-term care homes. ”

VanGorder said a CARP survey of its 72, 000 members found about 70 per cent of seniors want to stay in their own homes, but what that home looks like is evolving.

“It can mean a house. It can mean co-housing. Or a retirement residence, “he said.” But, it’s in their community, and it’s not that old-style, hospital-like warehousing of seniors with cookie-cutter care. “ 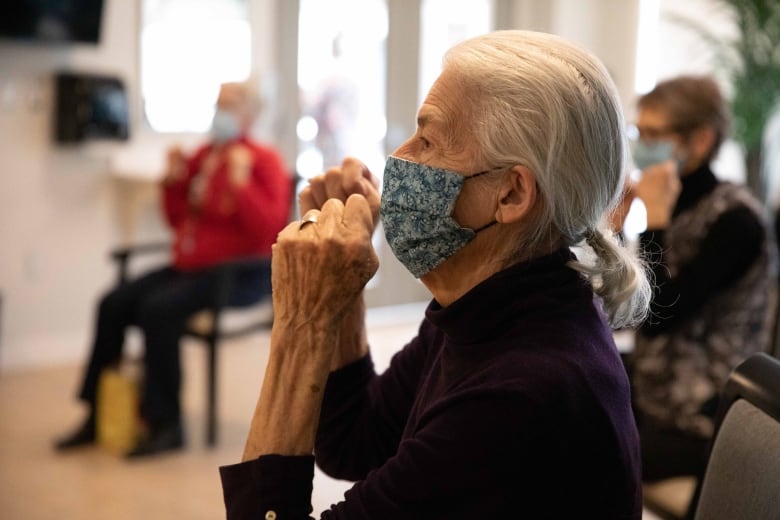 that seniors living alone who are socially disconnected during the pandemic are particularly vulnerable to declining mental and physical health.

When the pandemic began, Harbor Landing Village immediately closed its coffee shop and hair salon, restricted dine-in service at its restaurant to residents, banned visitors and created separate cohorts of seniors and staff that do not mix with each other. Seniors aren’t allowed to leave the home to visit their family’s homes or stores.

But the facility was keen to avoid halting activities and socializing altogether.

“We did not want to see our residents locked in their rooms,” said CEO Jansen Anderson. “The ability to interact t with others around you and know that you are not alone and have everyone there supporting you – both staff and your neighbors – is very, very important to anyone. “

Instead, the facility combined restrictions, screening, sanitation and vigilance from employees – who are not permitted to work anywhere else – to make itself a “fortress.”

The privately owned residence is a four-storey building that has 19 seniors in apartments on the top two floors and another in a licensed nursing home on the second floor. There is also a daycare, restaurant, coffee shop and hair salon in the building. Seniors can live independently in their own apartments and add additional care options at a cost.

Jan Gavel, a retired nurse, also decided to move into the home during the pandemic. She was diagnosed with cancer in September 82 and decided it would be easier to focus on her health if she sold her condominium and moved into the retirement residence, where she could ask for help if needed.

She takes part in as many activities as possible inside the building , which follows public health orders for gathering, physical distancing and masks. She has not been able to visit her son or daughter in person for much of the year but has managed to avoid loneliness by staying active, she said.

“There’s so many opportunities [for] trying new things, “she said. “I’ve made a lot of really good friends here, and everybody is friendly and open.”

Retired Grade 1 teacher Lee Eisler, 19, used to visit the children attending daycare in the building. She is not allowed to see them or her own grandchildren now, but she rolls her wheelchair in front of a television screen and reads to the children at the daycare virtually. She’s introduced as “Grandma Lee.”

“I’ve always loved being around children. So, it’s a great way to spend my year,” said Eisler.

Not stressed about vaccine wait

The retirement home has not had any cases of COVID – 000 so far, and seniors who spoke to CBC News said their quality of life has made them less anxious about waiting their turn for the vaccine.

“It did not bother me one way or another,” said Nedelcov, who received his first dose of a vaccine in February. “It was just another event, another half hour in my day type of thing. And I’m fine with that. I’ll be fine with the second dose, whenever that comes.”

Most provinces have prioritized vaccination for seniors living in long-term care facilities and nursing homes. In Saskatchewan, all long-term cares homes have received the first dose of vaccines for residents. The health authority is now moving on to seniors over 70, starting with those living in communal settings such as senior residences and apartment complexes or condominium complexes with shared spaces.

The seniors who live in Harbor Landing Village’s nursing home section have all received two doses of vaccines, and those over 70 who live in the assisted living unit have each received one dose.

Gavel, who is still undergoing cancer treatment and is immunocompromised, said she was not hesitant to get the shot but could have waited a while longer if necessary because she feels protected inside the residence.

Lee Eisler was happy to get her first shot but said she was not anxious about the prospect of waiting.

“Sure, there are times when I think, ‘Oh, I wish this was over,’ “she said. “But on the other hand, we’re in a safe place where we’re well-looked after. So I think we do not really have anything to be complaining about.”

Anderson said no place is “impenetrable” and there is a certain amount of luck involved in whether or not someone contracts the virus so he is relieved that the residents have all had at least one dose.

“The pressure has been significant,” he said. “The world that we work in represents some of the most vulnerable people out there for this virus. And, you know, the stress of the past year has been a lot.”

Rangnick to bring in ‘brain expert’ at Man Utd