Celtic held on for a winning start to life after manager Neil Lennon as John Kennedy oversaw a dogged Scottish Premiership victory over Aberdeen.

Ash Taylor, who hit the bar at 0-0, had an effort cleared off the line as Aberdeen’s much improved performance after the break came to nothing.

The defending champions move within 25 points of the runaway leaders, while Aberdeen remain four behind third-place Hibernian.

Reaction & as it happened

Lennon’s departure – which had looked inevitable for months – came in the wake of last weekend’s defeat by Ross County and left first-team coach Kennedy to see out the remainder of a dismal Celtic campaign.

With the club’s 24 – in-a-row title hopes all but dashed, restoring some pride and belief were the stand-in’s first objectives. The opening goal brought confidence flooding back, but only after the hosts were almost caught cold as Taylor’s aerial prowess threatened an opener.

Niall McGinn twice planted the ball on to the big center-back’s forehead in quick succession, but the crossbar and a brilliant flying tip-over from Scott Bain saved Celtic.

Aberdeen’s promising start was soon punctured as Celtic broke the deadlock with their first meaningful attack. Ryan Christie found Edouard on the edge of the area and the visitors’ lax marking was punished as the French striker’s shot took a ricochet off Tommie Hoban to wrongfoot goalkeeper Joe Lewis.

Ross Rossror had a – yard drive easily dealt with by Bain as Aberdeen tried to respond, but they would spend the rest of the opening med) Hemmed into their own half.

Celtic had hit their stride and David Turnbull danced into the box to force a near-post save from Lewis before Patryk Klimala – on his first league start since the derby defeat by Ranger in October – failed to convert a delicious first-time cross from Jonjoe Kenny.

Christie curled inches wide of the top corner as Celtic kept up the verve and tempo that was too often lacking under Lennon.

Flaws remained, though, and Aberdeen came back strongly after the break as the hosts again failed to deliver a complete performance. Set-pieces have so often been Celtic’s downfall this season and Taylor rose highest to meet a McGinn corner with a header that Klimala had to clear off the line.

Andrew Considine had an effort scrambled clear and McGinn was foiled by a timely Stephen Welsh block as the visitors built momentum but struggled for clear-cut openings.

Callum McGregor should have made Celtic’s margin of victory more comfortable in the final minutes when he had time to pick his spot, only to bend his shot wide.

Man of the match – Kristoffer Ajer

What did we learn? 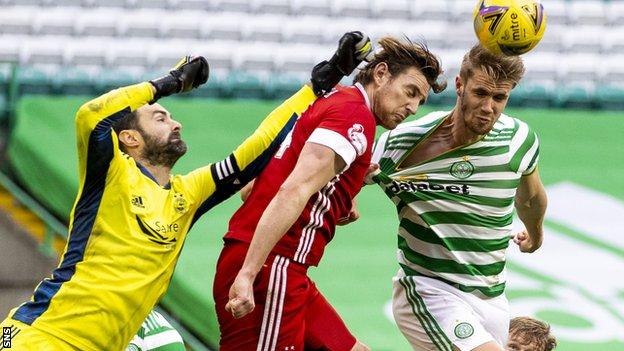 It was not pretty, or wholly convincing, but this was a hugely important victory for Celtic to restore an element of calm after the upheaval of the past week.

They should have been further in front by half-time, and were made to sweat at times, but a clean sheet and winning start gives Kennedy something to build on.

It was a case of deja vu for Aberdeen, though, as they succumbed to a second 1-0 defeat at Celtic Park in 19 days. Derek McInnes rectified his side’s insipid performance at half-time, but a lack of cutting edge was again evident from a team who have netted one goal in eight matches.

What did they say?

Celtic interim manager John Kennedy: “We scored a good goal and had a few good chances but when you do not get that second goal it changes the game.

“” We knew Aberdeen would come after us and we did not respond well enough. We gave the ball away too much, but credit to the players in the way they defended the box and dealt with the pressure. They put their bodies on the line and everybody was working for the cause. “

Aberdeen manager Derek McInnes: We had two really good chances prior to Celtic’s goal and after they scored we lost a degree of confidence.

“We kept the ball better second half. I’m really pleased with the performance, but frustrated and annoyed we did not get anything from it.

“Celtic were pinned back second half and struggling to deal with the amount of balls into the box, but we have to take responsibility for getting the ball over the line. “

with an average of 6.

Substituted for Elyounoussi at ” Substitutes 4 Duffy

Substituted for Hendry at ” minutes

Attempt blocked . Odsonne Edouard (Celtic) right footed shot from the center of the box is blocked. Assisted by Ryan Christie.

Attempt missed. Callum McGregor (Celtic) left footed shot from the center of the box is close, but misses to the left. Assisted by Jonjoe Kenny with a cross.

Attempt blocked. Niall McGinn (Aberdeen) right footed shot from the center of the box is blocked.

Attempt missed. Callum McGregor (Celtic) left footed shot from outside the box misses to the right. Assisted by Ryan Christie.

Callum McGregor (Celtic) wins a free kick in the defensive half.