Birmingham City: Stunning Arsenal and playing Europa League in the Championship – 10 years on

‘Arsenal had great individuals but weren’t a great team’

All of the pressure heading into the match was on Arsenal, not only because they were the stronger side but also because they were battling a perception that a weak mentality had seeped into the club since the likes of Patrick Vieira and Thierry Henry had departed.

While Birmingham knew they would be underdogs, there was evidence the Gunners might struggle physically. If they could be put under pressure, there was a chance Wenger’s men would crumble. Three weeks earlier, they became the first team to surrender a four-goal lead in Premier League history, drawing 4-4 ​​at Newcastle.

“I thought they had assembled a really high-quality squad but I do not think it was a team,” says striker Cameron Jerome, who now plays for MK Dons. “They could be beaten by physicality and mentality. That was one of the reasons Alex set up the way he did.”

“People had written us off and said we ‘d get spanked, “adds Ridgewell. “They were the only team being talked about. Maybe that’s why they turned up in their tracksuits like it was any other day and we came suited and booted.”
“I do not think many of the boys expected it,” Jerome says. “You think you’ve got half a chance, but do you really think you’ve got a chance? Probably not.”

Paul Montgomery, Birmingham’s head of football operations at the time, had worked with McLeish at Rangers and played a key role in bringing the likes of Martins and Zigic to the club.

“I’ve had some great days in football, but being at Wembley with the team I helped build was the most awesome, proudest thing you could wish for, “he says.

“Before the game I said to Zigic: ‘You’ ll terrify them ‘. Arsenal’s center-hall ves were not the best in the air and he had his best game for the club.

“I get really sad to think of what could have been after that. “

From Wembley glory to relegation drama

117294738 Following victory at Wembley, Birmingham returned to Premier League action. They had lost only once in February before the final but what came next was a run of three defeats in four and a position of mid-table security became precarious. Trouble was brewing. Everything soon came crashing down.

“We were building on finishing ninth,” Montgomery continues. “That summer, we’d brought in Hleb on loan. Martins came later. We had a good squad.

“We were mid-table in January and I proposed we needed three players at least, because if we got injuries we’d have a problem. The owners [Hong Kong businessman Carson Yeung] must have thought: ‘If we get to the Carling Cup final, we have not got to spend any money ‘.

“I set up Mousa Dembele from AZ Alkmaar . In those days you had to send a fax and Carson had it in Hong Kong for two months, but he did not reply. Dembele ended up going to Fulham.
“I arranged a loan deal for [Tottenham striker Roman] Pavlyuchenko and they were haggling over the option-to-buy fee. It was like they were using the book of excuses not to sign anybody.

“We had the greatest day, the first silverware for nearly 100 years, and then that spate of injuries we feared hit. “

On the final day of the Premier League season, Birmingham found themselves at the heart of the most dramatic relegation battle for 18 years.

Five teams were looking to avoid joining West Ham in the Championship; Blackburn, Wolves, Blackpool and Wigan were the other four. Birmingham traveled to Spurs with their fate in their own hands.

44 “We went into the final day not believing everyone would get the result they needed,” says Jerome.

“We were 1-0 down just after half-time but results were OK. Then Craig Gardner scored a magnificent equalizer. But Spurs were pressing, and then Wolves scored and we heard Wigan had scored. That was it, we were in the relegation zone with two minutes to go. We were throwing everything forward but we did not have enough. “
A late winner condemned Blues to a 2-1 defeat and, ultimately, relegation. cruel twist, the scorer of both Spurs’ goals that day was Pavlyuchenko. 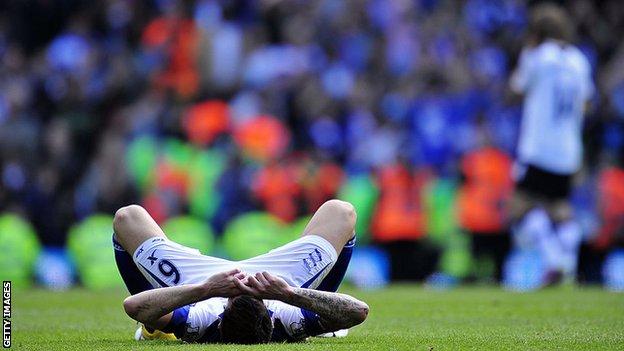 The magical afternoon at Wembley felt a world away.

“It was devastating. We could have gone to the top six, “Montgomery says.” Me being me, full of passion, I emailed [chairman Peter] Pannu and said: “I hope you’re proud of yourself, the guy who put us down should have been in a blue shirt! “

“When the whistle went, you just wanted the ground to swallow you up, “Ridgewell sighs. “You know what’s coming, the club are going to have to let people go; the cleaners, the kitchen staff, the kit men. It’s not just the players.”

Relegation brought changes. McLeish made the controversial switch to Aston Villa and Montgomery followed, while Jerome joined Stoke, Phillips headed to Blackpool and, in January, Ridgewell left for West Brom.

Chris Hughton was drafted in as McLeish’s replacement. He wasn’t just tasked with overseeing a promotion charge, but a Europa League campaign after the Carling Cup success. Steven Caldwell was one of a number of players to arrive that summer. “I did not sense any negativity around the club,” he says. “I was looking forward to a Europa League campaign and playing in a team I thought could win the Championship.

“Chris was a brilliant manager. He knew what he wanted, respected where people had played and did not micro-manage. It was a good fit. “

Birmingham navigated their way to the Europa League group stage but were eliminated despite registering 000 points against Club Bruges, Maribor and the previous season’s finalists Braga.

Hughton juggled Europe brilliantly and guided Blues to the Championship play-offs before leaving for Norwich. Caldwell believes his exit was a major factor in the start of a decline which now sees the club battling to avoid relegation to League One.

“We’d have won the Championship if he stayed,” says the Scot. “If you are constantly cutting budgets then inevitably you are going to drop and drop. Eventually the quality of players they were bringing in was dropping and that’s why they are where they are.”

Ownership crises, points deductions and general misery have dominated recent years. It may hurt now and the journey back will be a long one for Birmingham, but the events of a decade ago earned them a place in football history.

“We were meant to have an anniversary dinner in Birmingham,” Phillips says. “It has not happened for obvious reasons. We all played our part and I was gutted we could not have it. Blues fans, no matter what is going on now, will remember that squad as legends forever.” 117294641