Birmingham City manager Carla Ward said she was “very angry and disappointed” to learn two of her players had attended a party earlier this month.

Up to 10 Leicester City women’s players were fined and two Birmingham City players suspended for for attending the party.

A) Birmingham statement said they “were reminded of their responsibilities and the severity of their actions”.

“I was shocked because it was very out of character. They are privileged individuals so they crossed a line. The one way I felt I could discipline them and make them understand it is absolutely not what I expect was by taking away what they love, live and breathe – which is football. “

Ward said the players have apologized to their team-mates, whom “they let down”, including club captain Harriet Scott who has been working on Covid wards while studying for a medicine degree.

“There’s no sitting here and defending it. We have dealt with it in a very good way in my opinion and in a way that hopefully educates them not to do it again.

“I’ve made it very clear to the group that under no circumstance will this be tolerated on my watch. “

Leicester manager Jonathan Morgan said it was “a gross misjudgment” from his players – one of whom is believed to have hosted the party, which was also attended by several of the men’s under – 23 s squad.

“We were naturally disappointed and upset with what happened,” said Morgan. “We have to educate them on the severity of the situation.

“It’s a very isolated incident. It’s not what we’re known for. They know how many people they’ve let down, and the people of Leicester. “

” I do not know anything about it ‘ 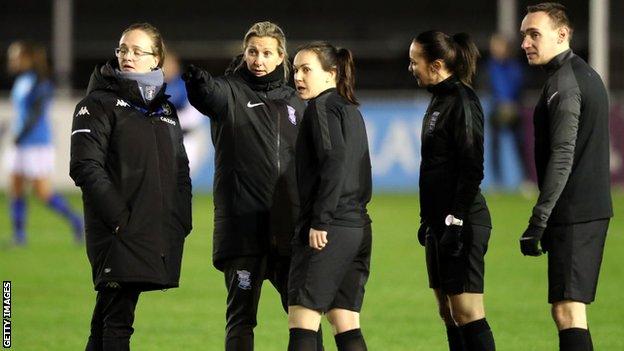 On Friday it) was confirmed external_link Birmingham City’s upcoming Women’s Super League fixture with Manchester City on Sunday has been moved to the national football training center at St George’s Park.

The Football Association said the decision was taken due to Birmingham’s current home ground at Solihull Moors “not meeting requirements in the rules and regulations of the league”.
The fixture was originally scheduled for December () but was postponed due to a waterlogged pitch, while home matches against Everton and Aston Villa have also been affected.
A number of fixtures elsewhere in the WSL have been postponed this season.

“I’m shocked. I still do not understand what’s going on. I was given ” minutes prior to tell the players and the staff. It’s safe to say nobody is particularly happy,” said manager Ward.

“” There’s sunshine and the pitch is absolutely fine. Do we not play any more games there between now and the end of the season? “

It is understood the FA were keen to ensure the fixture took place following recent postponements and said in a statement, Birmingham’s “remaining home games are under an ongoing review”.